Picturyhouse › Equipment › Kitchenette in the living room – how to place the equipment?
Equipment

Kitchenette in the living room – how to place the equipment?

Kristina Somerville
597
You need about 4 min. to read this article. 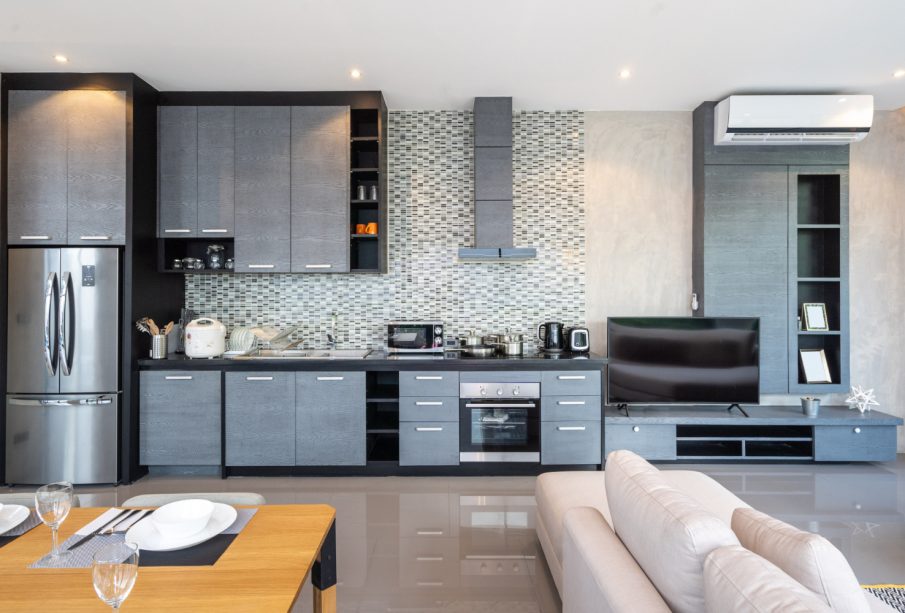 Combining the kitchen with the living room is a good idea? Sometimes we are forced to do it, especially when we have a small area. However, a kitchen annex in the living room can be a great arrangement trick.

Kitchen part in the living room? Why not!

When arranging the interior, let’s not be influenced by current trends, but first of all take into account the size of our apartment and individual preferences. We’re used to thinking that the kitchen should be a separate room, but we don’t always have enough space to make our ideas and plans come true. Sometimes we are forced to locate the kitchen annex in the living room

Fortunately, with the right arrangement, we are able to separate the space so that the kitchenette in the living room looks spectacular, and most importantly that the space is one hundred percent functional.

Open to the living room kitchen is an idea that young people like to implement in their homes. The space with a kitchenette can be separated from the living room area with, for example, a high bar or even a table. Separating a place to eat is one thing, but in addition to a corner for eating meals it is also worth separating other zones, including the one of rest.

How to develop the space in the kitchenette?

However, before we begin to combine the idea of a common area of the kitchenette with the living room, we must determine what equipment should be in the kitchenette. It is supposed to be a functional place, so we should maximize the use of every centimeter. If we have a small area available, then the best solution will be custom furniture. In fact, it may turn out that this is the only rational solution, because in furniture stores we will not get furniture of the dimensions we are interested in.

>> See also: Mid-century modern – what kind of interior design style is it?

When we begin to assemble the furniture, in order not to take away (especially in a small space) the much needed work surface, let’s think about locating a small-sized refrigerator under the countertop. Maybe there will also be enough space for a small dishwasher. In a small kitchenette connected to the living room there should also be space for a cooking plate. It does not have to be full-sized, two burners will be enough.

What other equipment is necessary in a kitchenette? Obviously, an oven that can replace a microwave oven for which we may actually have no more space. We do not mean to force it because the room will cease to be functional. Some people try to place a small microwave oven on the upper cabinets of the kitchenette, but this is not a very good solution. The equipment, which is largely to serve us to heat up meals, should be in the line of sight, in an easily accessible place, also for safety reasons.

Kitchenette in the living room – not only in studios

Combined with the living room kitchenette until recently was identified mainly with studios. After all, these are apartments where every centimeter must be maximally utilized. However, over the years the kitchenette moved to the hallway or living room became fashionable. It is a solution introduced even in the arrangement of larger apartments, including apartments.

The kitchenette in the living room creates a space where the life of all household members unites, but also a place where you can spend time together with invited guests

It also affects the perception of order. With even a small amount of clutter, you get the impression that disorder reigns throughout the room, including the area designated for relaxation. As there are no walls separating the kitchen annex from the living room, you may also be afraid of smells rising from the kitchen area. Fortunately, installing a good hood will solve this problem.

Grey kitchen – one shade, many possibilities